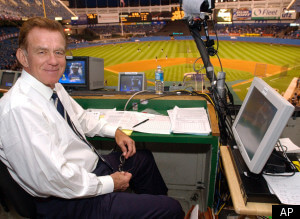 If you are wondering how much a broadcast sports announcer makes, the answer could surprise you. If you have always made it a tradition to announce sports in your own home, you might find sports broadcasting to be the perfect occupation for you to pursue. The best career for individuals trying to find their passion is a career where they have a passion and the much-needed talent. Sports announcing, while it is a very competitive field, is a great occupation for individuals who have a passion for sports, strong public speaking skills and are determined to compete. If you would like to learn about the earning potential for broadcasters and announcers in sports, read on and learn what you need to know.

Understanding the Difference Between Salary Highs and Lows

One thing than anyone who is pursuing a role as a broadcaster needs to understand is that there are highs and lows you have to consider when you are comparing salaries of announcers and broadcasters. If your idea of sports broadcasting is holding a position announcing major league games on big television networks like ESPN and TNT, you need to consider the alternative. New broadcasters, and even a majority of experienced announcers, will never make it to the major leagues. That does not mean that there is not money to be made in broadcasting, it simply means that you may not earn the big money that the upper ten percentile does. You should consider both averages and the ranges reported in the field as you are comparing your opportunities.

What Are Salary Ranges and Averages for Sports Announcers Throughout the Nation?

Learning that the highest-paid major network sports announcers all made about $5 million annually is enough to drive anyone to do what they love to do. While this salary is accurate, it is far from the average salary reported of $41,800, as stated by the Bureau of Labor Statistics. The national average salary reported in the field includes both the lower paid professionals and the upper echelon of professional in announcing. Excluding the highest-paid announcers, the range of salaries reported by professional sports broadcasters is between $18,824 and $75,754 per year. Jobs are available in more than just top networks. You may be able to find positions with colleges, minor league clubs, sports arenas, high schools, colleges, and more.

What Does it Take to Become a Sports Announcer?

If you are sure that you are ready to compete in a highly competitive field, it is time to complete a formal education degree program so that you can enter this field and gain attention. To become a sports announcer, you will need to have a degree in broadcasting or communications. You may start by getting a degree in high school with your bachelor’s degree, and then move on to advancing up the ladder by earning a master’s and gaining attention from local stations and then national stations. Be aware of the fact that you must get a reputation in announcing to advance.

Sports announcers play an important role in making sporting events entertaining. Listeners and viewers rely on the skills of the announcer to stay engaged in the game, and commentary also helps educate listeners while promoting specific products and services. Now that you know how much a broadcast sports announcer makes,  start studying and practicing in class and the mirror, so when its your time to shine, you will be ready!