Play Ball! The Best, Brightest and Worst Baseball Executives of All Time

Greatest Teams of all time (based on winning percentage)

Why being a G.M. is the toughest job in pro sports
• Have to satisfy crazy millionaire owner whims
• Have to scout, acquire talent all over the world
• With no salary cap, have to budget money at whatever amount owner wants. Some teams have big payrolls: NY, Boston, L.A., others don’t: Houston, Pittsburgh, Tampa Bay.
• Contract negotiations. Have to know when to trade high priced players. Have to deal with agents.
• GMs must keep tabs on basically every player in the Major League, as well as a good portion of the Minor Leaguers for call ups, trades
• Build a farm system. GMs must monitor the production and development of their Minor League teams and players if they are to have a successful farm system
• Pressure of yearly draft of high school and college player
But being a GM can pay well: $2 Million: salary of the highest paid G.M. in baseball, Brian Cashman, NY Yankees

• 2013 World Champion Boston Red Sox were the most recent
• GM Ben Cherington engineered the turnaround,
• How he did it: hired new manager, got rid of older players
• Record was 69-93 in 2012. Last place
• Won 94 in 2013 and the championship one year later 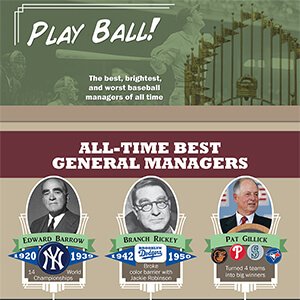