Football may be generally considered a high-impact, hard-hitting game for the young, but endurance, dedication and brilliance can ensure a long and legendary career, as you’ll soon see. The following 10 NFL greats displayed stamina, expertise and persistence, which ensured they were still in the game well after their 40th birthdays. From the joint first African-American NFL player to the legendary George Blanda, these sportsmen played season after season even after their peers had retired. A number of these football legends still hadn’t had enough after quitting the game, and launched themselves into new roles as coaches and consultants. 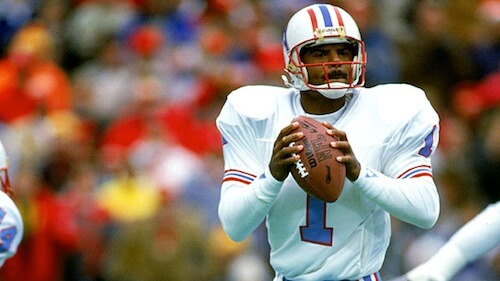 Warren Moon, a California-born 218-pound quarterback, is considered one of the most prolific passers in the history of professional football. When he wasn’t drafted after college, Moon was undeterred and decided to join the Canadian Football League (CFL). There, he helped the Edmonton Eskimos to five back-to-back Grey Cup Victories. In 1983, Moon won the Most Outstanding Player Award in his sixth and final season in the CFL. From there, Moon joined the Houston Oilers and launched his NFL career.

He became an incredibly successful NFL quarterback, and was named Offensive Player of the Year in 1990. At the time of his retirement, Moon was one of the NFL’s top five players for passing yards. He was inducted into the CFL Hall of Fame in 2001, as well as the Pro Football League Hall of Fame in 2006. He announced his retirement in January 2001 at the age of 44 and now works as a broadcaster for the Seattle Seahawks. 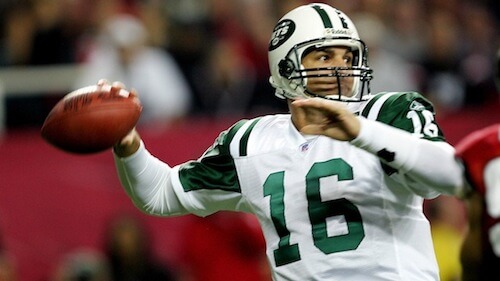 New York-born Vinny Testaverde played as a quarterback in the NFL for an incredible 21 seasons. He graduated from the University of Miami, where he was a Heisman Trophy winner, and in 1987 he was drafted by the Tampa Bay Buccaneers to play pro football in the NFL.

Color blindness made his first season with the Tampa Bay Buccaneers a difficult one, and the public and radio presenters made fun of him. Still, his scores continued to rise over time. Testaverde went on to play with the Baltimore Ravens, the New York Jets, the Dallas Cowboys, the New England Patriots and the Carolina Panthers. He played his last game with the Panthers on December 30, 2007 and retired in January 2008 at the age of 44. He became the oldest starting quarterback to win a game in the NFL, the only NFL player to throw touchdown passes 21 seasons in a row and the only NFL player to throw touchdown passes to 70 different players during his impressive career. 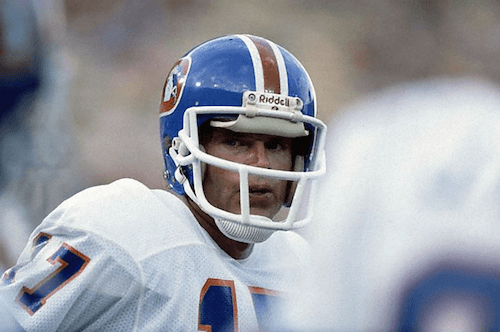 In 1998, Steve DeBerg became the oldest quarterback to start an NFL game. On October 25 that year, the 44-year-old Californian returned from five years of retirement to join the Atlanta Falcons against the New York Jets, and earned his place in the history books. He was also placed on the roster for the 1999 Super Bowl, gaining the distinction of being the oldest person ever included on the roster at 45 years and 12 days old, but he did not take part in the game.

Despite DeBerg acting as a backup player for a lot of his career, he was known for his stamina and determination – even in the face of horrible injuries. He played a total of 18 seasons over the course of 21 years. After his retirement, DeBerg went on to become head coach of the Indiana Firebirds for a short spell and assistant coach of Tampa Bay Storm (both Arena Football League teams). 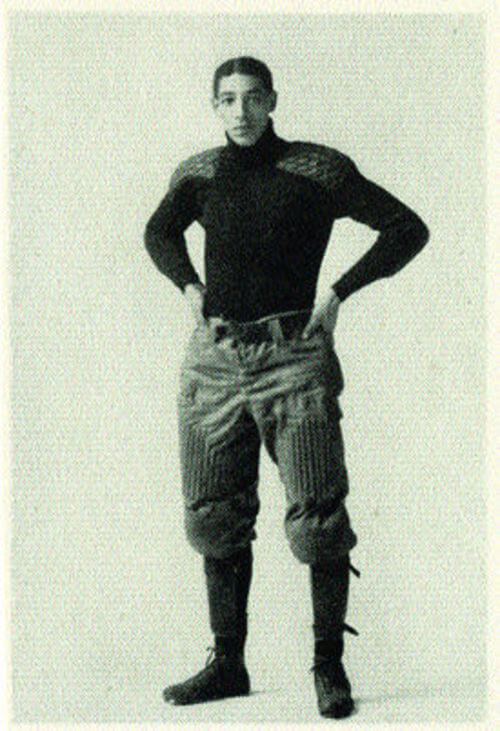 Playing the position of end, Bobby Marshall excelled at football. Marshall was highly skilled at a number of other sports as well, and his athletic prowess made him a Minneapolis legend. In 1903, Marshall went to the University of Minnesota, and thanks to the chance injury of another player, he became a freshman starter who the Minneapolis Tribune described as “invincible on the defense.”

Marshall was said to have faced challenges due to his color, and opposing college football teams claimed that he was a “rough” player. Despite these setbacks, he made his mark on American sporting history as the first African-American to play in the NFL (along with Fritz Pollard). Marshall didn’t play in the NFL until 1920, and retired in 1925 at the age of 45 after playing for the Minneapolis Marines, the Duluth Kelleys and the Rock Island Independents. 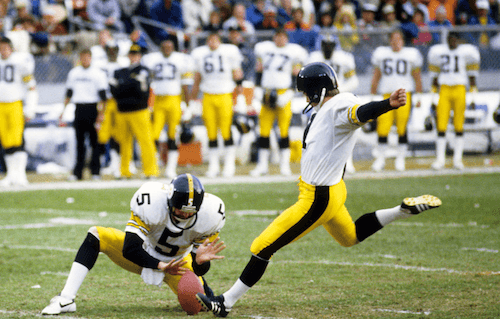 South African-born NFL placekicker Gary Anderson played soccer and rugby at high school and didn’t touch a football until he arrived in the US when he was 18 years old. As a keen rugby player, his drop-kicking skills soon won him the attention of college scouts, leading to a football scholarship at Syracuse University.

During his career he played for the Pittsburgh Steelers, the Philadelphia Eagles, the San Francisco 49ers, the Minnesota Vikings, and the Tennessee Titans. In 1998, he became the first NFL kicker to achieve a “perfect regular season,” with a 100 percent success rate for attempted field goals and conversions. In 2000, he became the NFL’s all-time leading scorer, eclipsing George Blanda – a record Anderson held until his retirement in 2004. He left the game at the age of 45 after 23 years in the NFL, which is the third-longest playing tenure to date. 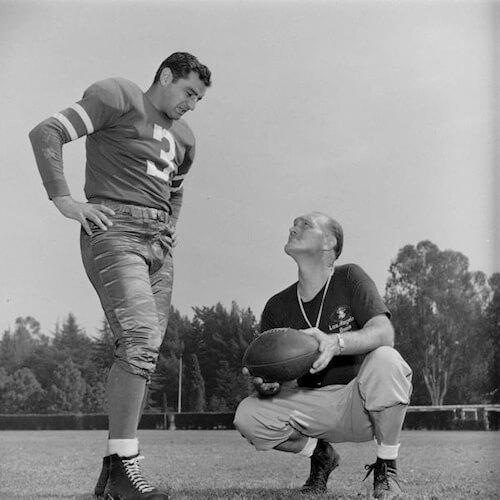 Ben Agajanian, also known as “The Toeless Wonder,” was the first kicking specialist in professional football – and he did it with four amputated toes on his kicking foot. Despite this potential setback, the Californian went on to become a legendary kicker for as many as 14 different pro teams over the course of 17 seasons. He was the first to take three steps away from the ball and two steps to the side, as well as the first to kick with the laces of the ball facing outwards, and he was a stickler when it came to technique.

Perhaps one of his greatest contributions to the game came after his 1964 retirement, aged 45. At this juncture, Agajanian turned his significant talents to coaching – he taught kids and aspiring college kickers, all the way up to pro hopefuls. As pro football’s first kicking coach, he worked with the Dallas Cowboys for two decades and organized kicking camps in Texas and California.

John Nesser, second from the left, was born in Germany in 1875 and emigrated to Dennison, Ohio in 1882. He and his brothers worked as boilermakers for the Pennsylvania Railroad and enjoyed playing football during their lunch breaks. In 1905, John played for the Massilon Tigers. Then, in 1907, along with six of his brothers (some of whom are pictured above), John joined the Columbus Panhandles when the team was established by future NFL president Joe Carr.

The Nesser brothers became the backbone of the team for almost 20 years, traveling extensively to road games and eventually becoming hugely popular. John and three of his brothers retired after the 1921 season. John was 46 years old at the time, setting the record as the league’s oldest player (until it was beaten by another entry on this list). John’s brother Ted (far left) has been described as a “football genius” and is credited with developing the triple pass, the short kickoff and the criss-cross play. 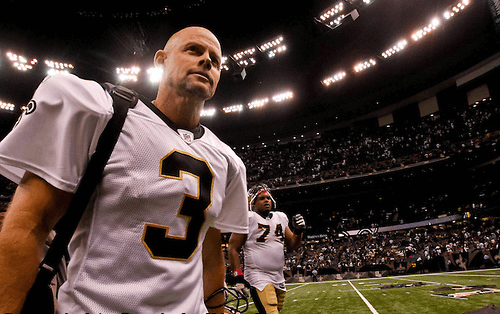 John Carney is a retired NFL placekicker who has played for the Tampa Bay Buccaneers, the Los Angeles Rams, the San Diego Chargers, the New Orleans Saints, the Jacksonville Jaguars, the Kansas City Chiefs, and the New York Giants. He has played in four different decades during his 23-season career – which is quite notable, considering how unusual it is for pro football players to still be active over the age of 35. Carney was well aware of this fact, explaining, “You can’t take anything for granted. When you’re young, sometimes you do. You get into a routine and think, ‘Hey, I’ll be doing this for a long time.’ And you can’t really take this for granted.” He stayed in the game until he was 46 years old, finally retiring in October 2010. Carney has also been a kicking consultant for the New Orleans Saints, and has developed a two-week summer course named “The Launching Pad” specifically for pro kickers. 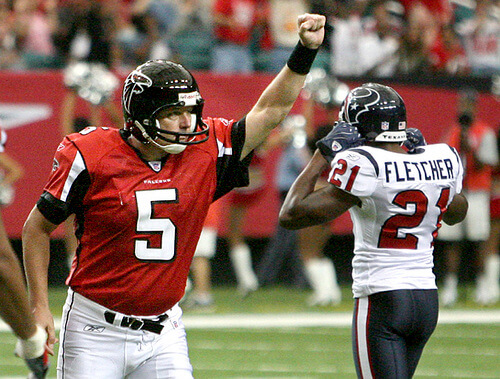 Known as “The Great Dane,” Morten Andersen was born in Denmark, where he excelled as a soccer player, gymnast and long jumper. In 1977, he travelled to the US as a high school exchange student, at which point he took up football. In his first season in the sport, he played so well that he was offered a scholarship to Michigan State University. He excelled at college football and was drafted into the New Orleans Saints team as kicker in 1982. During his time with the team, Andersen kicked 302 field goals and became known as “Mr. Automatic” for his accuracy and consistency. He became the NFL’s all-time leading scorer on December 16, 2006. Later that month, he also became the league’s career leader for successful field goals. He played his last game in December 2007 for the Atlanta Falcons, at the age of 47 – but didn’t retire until December the following year, having not played a game all season.

George Blanda is a legendary figure in pro football – and not just because he became the oldest player in pro football history on January 4, 1976, aged 48 and 109 days (a record that still stands today). Blanda played for 26 seasons and was the all-time leading scorer at the time of his retirement. He is one of only three players to play in four different decades, and has a slew of other records and accolades to his name as well.

Blanda got started on the road to his professional career at the University of Kentucky, where he played quarterback and kicker under coach Paul “Bear” Bryant. During his impressive career, he played for the Chicago Bears, the Houston Oilers, and the Oakland Raiders, and he also had a small stint with the Baltimore Colts. Pro Football Hall of Fame executive director Steve Perry described Blanda as “a seemingly ageless wonder.” He added that Blanda “inspired legions of fans over a 26-year career, with his clutch performances as a quarterback and place kicker.” He died in 2010 at the age of 83.

Other Articles of Interest: