We tend to think of sports mistakes as a game-sealing interception or a last-second shot that bounces off the rim. But these sports mistakes happened long before the players stepped onto the field, court or rink. Here is a look at some of the worst mistakes made by management in sports history.

What’s In a Name?

When the Hornets moved from Charlotte to New Orleans in 2002, they took the name along with them. Two years later, Charlotte got an expansion franchise and the city hoped the name would return. But the name stayed in New Orleans and instead the new team became the Bobcats.

The Hornets name once again is in Charlotte as the New Orleans team changed its name to the Pelicans.

With three young stars on the roster (Kevin Durant, Russell Westbrook and James Harden), the Oklahoma City Thunder were poised to dominate the league. Only problem was, they said, they couldn’t afford to give Harden the max deal he sought. So they traded him to Houston for guards Kevin Martin and Jeremy Lamb and a couple of second-round draft picks (the Rockets also got a center and two forwards).

Harden was the runner-up in MVP voting in the 2014-15 season, and Durant won the award last season. This year, the Rockets fell to the Warriors in the Western Conference Finals, while the Thunder didn’t make the playoffs.

In a deal that didn’t quite seem ridiculous at the time, the L.A. Dodgers traded pitcher Pedro Martinez to the Montreal Expos for second baseman Delino DeShields. At the time, DeShields was coming off a few good seasons, including one in which he was in the top 20 in National League MVP voting. But he never did much for the Dodgers, hitting a meager .241, and spent several seasons bouncing around the league. Martinez, on the other hand, became a Hall of Famer.

It would be hard to imagine Kobe Bryant in a uniform other than purple and gold, as he’s become so synonymous with the Los Angeles Lakers. But it didn’t start out that way. The Charlotte Hornets selected Bryant, then straight out of high school, with the 13th overall pick in the draft and then promptly traded him to the Los Angeles Lakers for center Vlade Divac in a deal that actually was decided before the Hornets knew which player they’d be drafting.

The two played on the same Lakers team in Divac’s last NBA season in 2005.

As a rookie for the Atlanta Falcons in 1991, Brett Favre was less than stellar. He attempted only four passes, none of them for a completion (except for two completed to the wrong team, with one being returned for a touchdown). Favre was traded to the Green Bay Packers during the following offseason in 1992, and he went on to become one of the best quarterbacks in NFL history. The Falcons, meanwhile, had 18 starting quarterbacks between 1991 and 2010, the year Favre retired for good.

11: Times Favre was named to the Pro Bowl

In a move many people believe cursed the Red Sox with decades of heartbreak, Boston agreed to send Babe Ruth to the New York Yankees in exchange for $125,000 (technically selling him rather than trading him).

Ruth wasn’t exactly a slouch during his tenure with the Red Sox, winning 89 games as a pitcher in six seasons and leading Boston to World Series titles in 1915 and 1916. As the American League had no designated hitter at that time, Ruth was also a power at the plate, and team management played him in the outfield on days when he didn’t pitch. In his first season playing mostly in the outfield, the Sox won another World Series title.

His record of 29 2/3 scoreless World Series innings pitched stood for 43 years, and by the 1919 season, Ruth had surpassed Ty Cobb as baseball’s most popular player.

But Boston’s fortunes changed — for what seemed like forever — in 1920, when Sox owner Harry Frazee dealt his star to the Yankees.

Thanks in part to his dominance at the plate for New York (he hit 54 and 59 home runs in the 1920 and 1921 seasons, respectively), the Yankees were able to build Yankee Stadium, dubbed “the house that Ruth built.”

After the Ruth deal …

… the Red Sox went 86 years without a World Series win before finally shaking the Curse of the Bambino in 2004.

Redskins say, “Everything must go!”

After their efforts to land free agent quarterback Peyton Manning failed, the Washington Redskins went all in, trading three first-round picks and a second-rounder to the St. Louis Rams in exchange for the Rams’ No. 2 overall pick in the 2012 NFL Draft, selecting quarterback Robert Griffin III. When Griffin went on to have a standout first season, being named the NFL’s offensive rookie of the year, the deal seemed a good one for Washington. But Griffin’s performance since then has called that into serious question.

Redskins wins over past two seasons

With the NBA and ABA merging in 1976, the New York Nets were set to enter the league, but the NBA’s New York Knicks demanded a penalty payment from their new NBA neighbors. Fresh off an ABA championship, the Nets’ star, Julius Erving held out for a better contract. With financial pressure mounting, Nets ownership offered Erving to the Knicks to cover their penalty payment; when the Knicks passed, the other NBA teams pounced, with the Philadelphia 76ers making the best offer. In 1977-78, the Nets became the New Jersey Nets, and the Knicks won just one playoff series over the next six years.

Now a two-time Super Bowl-winning coach, in 2002, Tom Coughlin was looking for a job after being sacked by the Jacksonville Jaguars. As the team’s first coach when they joined the league in 1995, Coughlin helped make the Jags one of the most successful expansion teams in NFL history. They made the playoffs in four of his seven seasons, twice reaching the AFC Championship Game.

Since letting Coughlin go, the Jags have made the playoffs twice in 10 seasons, and they’ve had four head coaches in the span. Coughlin took the head coaching job with the New York Giants in 2004 and has won a pair of NFL titles.

A tough defenseman during his playing days, Mike Milbury helped the Boston Bruins twice reach the Stanley Cup Final. But as general manager of the New York Islanders from 1995 to 2006, he made some baffling decisions, to say the least.

Forced by ownership to operate on a shoestring budget, he traded star scorer Zigmund Palffy because his contract was too high and traded away several prospects who went on to have successful careers for other teams. Here are a few examples of Milbury’s moves:

Drafted Rick DiPietro first overall and later signed him to a 15-year contract (60+ games in NHL only 3 times in 11 seasons with Islanders; 1-time All-Star)

Knicks gamble and lose with Thomas

From 2003 to 2008, Hall of Fame NBA player Isiah Thomas presided over some of the worst decisions in New York Knicks history. The year Thomas took over, the Knicks had a losing record at 39-43, but that was good enough for a playoff spot. They never again made the playoffs in Thomas’ tenure and by 2006 had the highest total salary burden — $126 million, more than twice the salary cap — and the NBA’s second-worst record.

Thomas’ blunders include trading away what turned out to be a pair of lottery picks for fifth-year center Eddy Curry, who never managed to average more than 20 points per game throughout his career. He further dug the Knicks into a hole with other bad trades and big contracts to ineffective players — not to mention costing the Knicks’ ownership $11.5 million due to a sexual harassment allegation by a female Knicks executive.

But perhaps Thomas will have the last laugh, as he was recently named president of the WNBA’s New York Liberty. 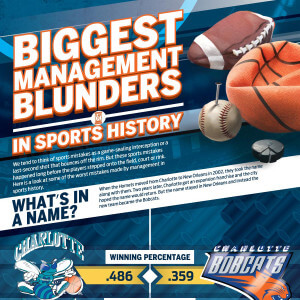