Every two years we turn on our t.v.’s to some surprisingly obscure Olympic sports. Here’s what you need to know to keep you entertained from curling to trampoline.

How it works:
Cross-country ski trial broken up into
2 or 4 shooting positions
half prone
and half standing

Penalty =
Extra 150 meter ski loop
Add 1 minute to the skiers time
Or, use one of three “extra” cartridges.

Three steering mechanisms for the same sport
tracks= concrete covered in ice;
one straight section
one “labyrinth” or three turns in quick succession
1200-1300 meters long and 15 curves
“Peterson turns” including a 180 degree turn, and a 270 degree bank angle.
120 km/h and up to 5 g’s.

Luge:
The fastest and most dangerous of the sliding sports.
Record: 95.69 mph by Manuel Pfister of Austria
1 or two person sleds
Feet first, head up.
Steering: Flexing one sides calf and exerting pressure with the other shoulder.

Skeleton:
One person, face down and forward.
Steering: Torque provided by head and shoulders.

One large granite “stone” is cast across the ice.
Teams of 4 take turns guiding the stone towards a target.
Players “sweep” in front of the stone at the direction of the skip

Sweeping:
(1) reduces friction that slows down the stone
(2) reduces the curl (spin) of the stone

Designed by Baron Pierre de Coubertin, founder of the modern Olympics.
meant to simulate the experience of a 19th century cavalry soldier behind enemy lines.

How it works:
Competitors ranked for performance in first three disciplines
And given start times for the final combined event.
For shooting and running:
(50 seconds to hit 5 targets) 4 times throughout the run.
Winner is whoever crosses the finish line first.

Goal: Allow the horse to perform under saddle with the degree of athleticism and grace it would naturally show in the wild.

Pyramid of horse training:
Rhythm and regularity–Keep rhythm with pure walk, pure gait, or pure canter.
Relaxation–relaxed blowing of nose, relaxed chewing on bit, legs swinging like pendulums
Contact–the pushing power of the horse
Impulsion–flow of pushing power from back to front is even, relaxed.
Straightness–The body and legs follow a straight line, keeping the horse in perfect balance.
Collection–shorter strides of greater energy and activity.

Performance ranked from 1-10
Based on presentation of a variety of gaits, transitions between gaits, and even pirouettes.

How it works:
3000 meter track
immovable obstacles
(they don’t fall over when hit like track hurdles)
(36 inches for men)
(30 inches for women)
Each circuit has 4 obstacles
and 1 water barrier.
Each race is 7 circuits.
Can jump over obstacles by any means
(ex:foot, hand, tripping, climbing.)
The fastest time wins!

Gymnasts coordinate 10 contacts with the 14 by 7 foot trampoline.
with Feet, seat, front, and back.
Beginning and ending with feet.
Variety of twists
and somersaults
(lateral and longitudinal movement)

Three basic shapes of moves:
1.) Tucked: with knees clasped to chest by hands
2.) Piked: with hands touching close to feet and both arms and legs straight
3.) Straddle: legs creating a triangle with hands on ankles.

Ranked from 1-10 based on:
1.) Incomplete moves
2.) moving too far from the center
3.) Degree of difficulty 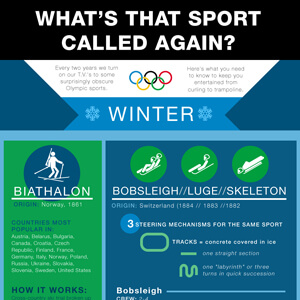 What is a Sports Massage Therapist?