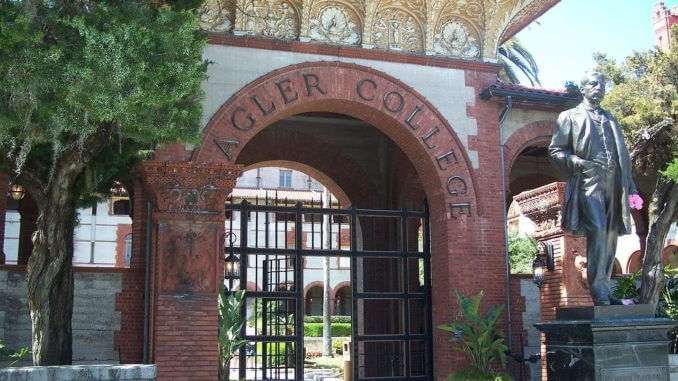 According to the U.S. News, Flagler College of St. Augustine is the South’s second best college and 12th top regional value. The Princeton Review included Flagler among the “Best 381 Colleges” 2017 guide. On Niche, Flagler was declared America’s 244th hardest college to get into with the 126th best college location. Washington Monthlyplaced Flagler as the 154th best bang for the buck in its Southeast rankings. The publication also ranked Flagler College of St. Augustine as the country’s 130th top baccalaureate institution. Buzzfeed featured Flagler as the #2 most beautiful campus worldwide. Best College Reviews ranked Flagler among the “50 Best Colleges By the Sea” too.

Continuously since 1973, Flagler College of St. Augustine has held accreditation at Level III without public sanctions from the Southern Association of Colleges and Schools Commission on Colleges (SACSCOC). This regional agency is recognized by the Council for Higher Education Accreditation (CHEA) to review Flagler’s Bachelor of Arts, Bachelor of Fine Arts, and Master of Fine Arts programs for the U.S. Department of Education.

Classified as “selective,” Flagler College had a Fall 2015 acceptance rate at its St. Augustine campus. Being among the lucky one-half of applicants requires graduating from a licensed high school or finishing the GED. Homeschooled students with detailed transcripts from grades 9-12 are also accepted. Flagler expects taking at least 13 college-prep units with superior grades. On average, admitted freshmen have a secondary GPA of 3.43 overall. Students who’ve scored 3 or higher on Advanced Placement exams are granted transfer credit. First-year applicants need to submit a minimum SAT CR+M score of 1010 or ACT composite score of 21.

Switching to Flagler’s Sport Management Major from another regionally accredited college will require at least 15 transfer credits. Having completed at least one full-time semester after high school graduation for introductory courses like English composition or pre-calculus is preferred. To transfer, courses must be graded “C” or higher. The maximum amount transferred is 64 from community colleges and 75 from four-year universities. Flagler applicants holding an A.A. degree automatically transfer to junior standing. Transfers generally need a 2.5 cumulative GPA or better to compete. International scholars have an extra step to certify English fluency with a minimum TOEFL pBT score of 500.

Full-time Flagler Saints will be charged $9,100 per semester or $18,200 each undergraduate year regardless of Florida residency. Studying sport management part-time will cost $620 per credit. Returning Flagler alumni receive a break for $380 per credit though. Residential undergrads need to budget $5,350 and $5,330 annually for room and board respectively. Textbooks and supplies are expected to add $1,000 per year too. Total annual cost of attendance is roughly $32,220 for on-campus and $22,100 for commuting students.

Flagler College of St. Augustine is a selective, liberal arts community where undergrads choose from 29 majors, such as Sport Management or Hospitality and Tourism Management. After the First-Year Experience, the 59-credit SPMA major develops the administrative skills for the multibillion-dollar sports industry with diverse courses from facility management to sport governance. Undergrads may declare minors like Finance, Media Studies, Advertising, and Sociology for specialization. Sport management students in the top 15 percent of their class can also add rigor with the Honors Program. With the 16:1 student-faculty ratio, courses will stimulate active discussion and close professor mentoring.