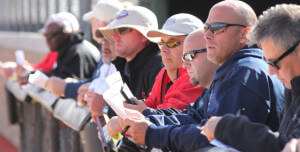 If you want to become a sports scout, you will need to have a specific skill set that enables you to discover talent wherever it may be. Those who don’t mind spending time in small towns, spending nights in cramped hotel rooms and spending time away from their families in search of the next superstar player could be the best candidates for the role.

You Have to Love Sports

Most Scouts Start as Interns

Scouts will get noticed the same way as many others in the sports industry get noticed. They will start as an intern for a local sports team or work for their alma mater as a graduate assistant in their athletic department. Once they have paid their dues as an unpaid intern, they will be given positions as either regional scouts or assistants to regional scouts. From there, you can become a head scout for a region or become the head scout for the entire team who oversees all the other scouts on the team payroll.

It’s All About Who You Know

It is easier to break into the world of scouting if you have connections within the industry. This is why it is important to spend time during your high school or college years working with pro or college teams in their athletic department. Even if you just spend a summer or two fetching coffee for a coach or another scout, you will gain contacts that can be useful when you want a job later on.

Do You Need Formal Education?

While most scouts do have a formal degree, it may not be necessary to have a college education to become a scout. If you have played a sport for many years in college or as a professional, that experience may be enough to get you a job. If your father was a coach and you spent many years breaking down film with him, that experience may be enough to earn you an entry level position as a scout. However, those who feel that a college degree will help them should consider a sport studies degree or something similar.

Do you want to become a sports scout? If so, you will need to have a passion for the game, be willing to spend time as an intern and possibly get a college degree. Those who are good enough at their scouting jobs can eventually land roles as personnel directors or team presidents.